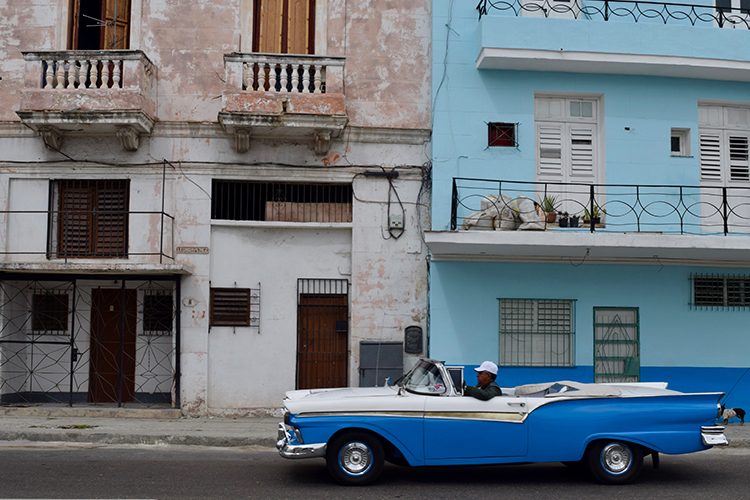 Taylor RobinsonFebruary 11, 2017
CubaTravel0 Comments 0
The following article is published in the #RGNNCuba Magazine: Vol. I, Winter 2017, produced during ROOSTERGNN Academy’s first Travel Journalism & Photography Internship Seminar in Havana and Trinidad, Cuba, under the editorial direction of RGNN Expert and Mentor Benjamin Jones. Follow #RGNNCuba for all of our Cuba coverage.

We turned right out of Calle Neptuno, the busiest residential street in Central Havana; our Pepto Bismol-colored maquina rocking left and right over the stones in the streets as our hips and shoulders followed the beats of the latest Cuban reggaeton blasting from the sound system.

Yoansi, our driver, with his left hand still on the wheel, reached to turn up the music on the newer-looking stereo tucked in the glove compartment, with just enough time to spare to dodge a pothole.

The maquina, the name used by Cubans to refer to the many classic American cars that fill their country’s streets, was a 1952 Buick which we had rented for an hour-long tour of the city. 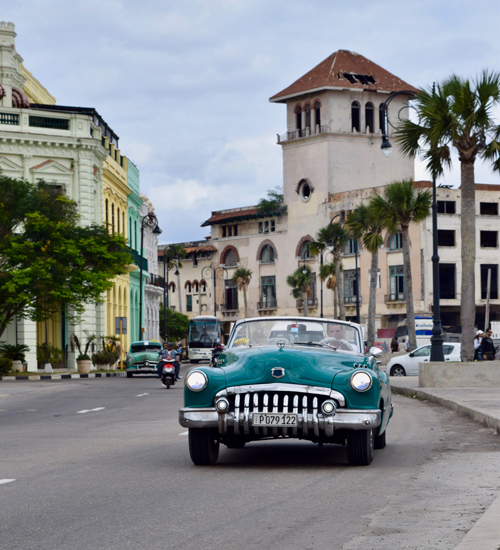 We cruised down the boulevard, passing the Hospital Municipal, El Rápido Shopping Center and the city’s lush botanical garden at a comfortable 40 miles per hour, with the heat from the old engine rising up my legs.

Before the revolution, when economic relations between the United States and Cuba were good, these then new rides poured into Cuba, but after the revolution and subsequent trade embargo, Cubans were unable to import newer American cars and were forced to continue using the older ones, which now look like relics riding up and down the streets.

We peeled into the left lane to get a good view of a big church, squeezing in between two Chebi’s – that’s Chevrolet in Cuban Spanish – a hot pink ’55 was in front and a white and blush ’53 trailed behind us.

Our caravan of old cars passed the Santa Corazon de Jesus; a neo-Gothic style Roman Catholic church, which was visited by Pope Francis during his recent stay in the Cuban capital.

Our shiny, well-polished rides contrasted with the peeling paint on the once elegant buildings throughout the neighborhoods. Then we drove along the famed Malecón, a long seaside promenade fronting the Caribbean, before turning right and a mile later, we pulled up to the Plaza de la Revolución.

The expansive space overlooked by images of revolutionary heroes Ernesto “Che” Guevara and Camilo Cienfuegos, was packed with dozens of other old Buicks, Chevys, Fords, and Oldsmobiles, filled with tourists as the red white and blue Cuban flag waved above. 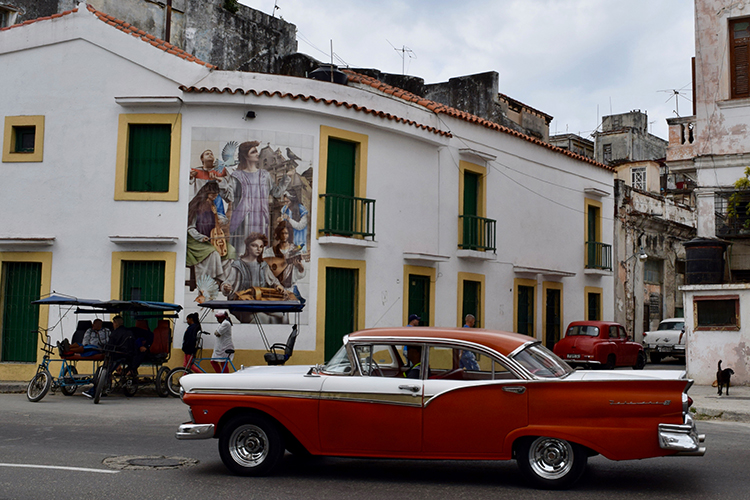 Classic car tours in Havana start at 50 CUC (or $50 at $1 to the CUC) for an hour with prices negotiable for longer tours of up to three hours.

But one doesn’t need to do fork over 50 CUC to experience a ride through the city in one of these vintage prized possessions. Classic American cars dominate the streets of the Cuban capital as everyday taxis for foreigners and locals alike.

For 5-10 CUC (sometimes being a tourist means you will be charged more, but you can always try to barter before accepting a service) you can hop in an old-school ride from one part of the capital to another. Just stand at the edge of the sidewalk and hold out a finger and an Oldsmobile or Chevy from the ‘50s will pull over and the driver will ask you where you need to go.

The old classic rides are a cash crop for their owners and drivers. While the average state job in Cuba pays $30 a month a taxi driver can potentially make hundreds of dollars a day.

Ernesto Ochoa, 46, the driver of the white and blush 1953 Chevy, which was part of our caravan, started working a month ago as a freelance taxi driver for his friend, who owns two vintage Chevys.

Following the break in diplomatic relations between the United States and Cuba, and resulting trade embargo in the early 1960s, Cuban car owners suddenly found themselves without a source of replacement parts for their aging vehicles.

Mechanics, body shop owners, automobile painters and upholsters had to find innovative ways to repair and maintain the cars. Some pieces and accessories were made by hand, while others were supplied by family and friends in the United States. But foreign countries are also a source for replacement parts.

“I have friends in Peru, Panama, and Ecuador who manufacture spare parts,” said Ochoa. “So the majority of the parts we use are well-made copies, not originals.”

According to the drivers, Chevys are the easiest to maintain because they are the most common and parts are easy to find, but new parts for old Jeeps are the hardest to locate.

As we wheeled out of the Plaza de la Revolución, Ricky Martin’s Vente Pa’aca blasted from the speakers and the Buick veered off along the Malecón, the top down, the breeze blowing our hair, heading back to our lodgings and an end to our classic car adventure.