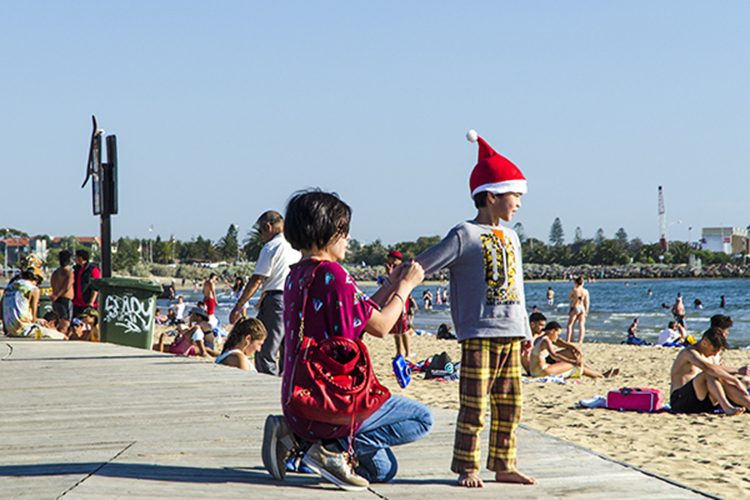 Working Holiday Visa in Australia: Christmas at the Beach

This article is the third in a series titled “ChroniclOZ” by Matteo Fabi, co-founder of  the blog Blobally, who will be working abroad in Australia for the upcoming months. Read the first article in the series here.

During my second month in Australia, I finally fulfilled my long time dream of wearing a Santa hat while laying in the sand, kissed by the sun, enjoying a refreshing mojito. It is definitely not the first time I spend the end of the year abroad, but let’s say at this round I miss home a little less, just thinking of my beloved people freezing in the European winter.

Actually, I have some family here too: my brother joined me in the adventure of the Working Holiday Visa on December 23!

Blessed with a beautiful summer day, on Christmas Eve we headed to the most renowned lido in town, just a stone’s throw away from the CBD: St. Kilda Beach. This commonly buzzing spot was crowded with people celebrating in the way everybody loves over here, which is just grilling generous amounts of meat in front of the sea. Drinking in public is forbidden by law, but special conditions clearly apply in such a day, as people did not even bother to hide their drinks as (we) usually do. Sun, music a laughs made the atmosphere simply magic, and the day merrily went by until the solar disk plunged where the sea and the sky meet, spreading a mystic light all over the horizon.

The day after, we had the pleasure of being invited to a proper Aussie Christmas lunch: roasted ham, salmon, grilled prawns and an infinite variety of salads and cold dishes made me forget the sophisticated food I have always eaten in such occasion. Let’s speak the truth: especially in the South where I come from, Italians definitely spend too much time at the table. My conventional idea of a food marathon was wiped out, with much surprise, when at 4pm all the guests were released, and everybody just went enjoying the time the way they preferred. Of course, we just went back down the beach.

At the time of my last ChroniclOZ feature, I was still looking for a job. I focused on retail, and eventually it did not take me a long time to find a suitable employment. Indeed, it turned out to be one of the best job I ever had. Hired with the commitment of 15 hours a week, I ended up working Monday to Friday, 8am to 4pm, at one of the clothing stores of the DFO South Wharf, a massive outlet in the heart of Southbank. The period could not be better, as the demand for Casual Sales Assistants was really high before the holidays and summer. Nevertheless, after thousands of unsuccessful online applications, I finally found a job just handing over my printed resume store by store.

Sales started as usual on Boxing Day, and this led to an incredible amount of hours I found myself working. The already good pay-rate of $24.30 p/h – taken to $55 p/h on public holidays – combined with a weekly wage, topped up my Save Account at the speed of light. The cherry on top of the cake has been working in one of the most sweet and cheerful teams I have ever been part of.

Thanks to lovable local people I met on the way, I could fortunately take a breath here and there and visit a couple of spots nearby. Melbourne lies along the coast of the massive Port Phillip Bay, enclosed to the West by the Bellarine peninsula and to the East by the Mornington peninsula. Within the bay the water is usually quite still, although generally not as clean as along the outer shores, but the further you drive away from Melbourne, the better it gets.
On one occasion, we drove south-east to Mornington, a seaside town representing the comfortable, relaxed and usually wealthy way of dealing with the sea typical of the eastern branch of “the Bay”. The relentless wind and the absence of waves makes also of this side a hot-spot for kite-surfers.
In our second trip, we drove west to Torquay, one of the first spots along the famous Great Ocean Road. Since the waves were much more restless, I decided to practice in what tops my bucket list of things to get done down here: learn how to surf. As usual, I followed a learning-by-doing approach, and just hired a board and wetsuit at Go Ride a Wave for a very fair cost ($25 two hours, $35 four hours). I did not manage to stand up once, but hey, I guess you need to learn how to fall with elegance first.

The arrival of my brother, and other unexpected circumstances, suddenly changed my plans. To date, I have already sadly given the notice to the store where I work, and I’m dealing with the purchase of a second hand car, the most powerful tool in order to succeed in the following step of this adventure oversea: working in the farms. Every visitor on a Working Holiday Visa has to get done 88 paid days of work in Regional Areas during the first year, in order to qualify for a second year. The “88 days” sound like three months, but actually many fellow backpackers told me that it takes 4/5 months to get them done, since nobody works 29 days a month.

Thus, this experience is going to radically evolve. I am about to leave the city and its predictable life, and, as I love, hit the road towards the unknown.

In the next few posts, I will take you hand in hand, and we will live together this journey through people, places, and life.