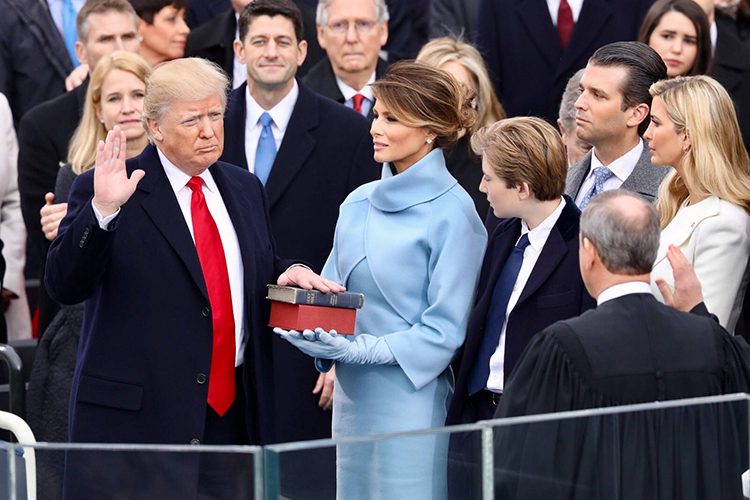 Can Donald Trump be Impeached?

It is fair to say that President Donald J. Trump’s first few weeks in office have been eventful. From the widespread protests in the days proceeding his inauguration, to his controversial proposals in regards to women’s rights, immigration, and global warming, it is clear that Trump’s first 100 days in power may be the most memorable of any predecessor. However, they have also divided an already shaken nation, and many have questioned whether some of his Executive Orders are unconstitutional and whether he should be forced out of office.

One of the key points throughout Trump’s presidential campaign was the issue of immigration. Initially, the President’s main target was Mexico. According to Trump in 2015: ‘You are going to have to send people out. Look, we either have a country or we don’t have a country. We are a country of laws. [Those who entered illegally are] going to have to go out and hopefully they get back. But we have no choice if we’re going to run our country properly & if we’re going to be a country.’ To solve the immigration problem, Trump infamously suggested building a wall on the Mexico-US border: ‘We will have a wall [on the Mexican border]. The wall will be built. The wall will be successful. And if you think walls don’t work, all you have to do is ask Israel.’ He has also made many controversial remarks regarding women, class, Muslims, and ethnic minorities.

Nobody thought he would be elected, and now that his policies are beginning to be implemented, is Trump going too far?

Trump’s presidency with his proposed repeal of the Affordable Care Act, also known as Obamacare, which was one of the key implementations of Obama’s presidency. The act represented a huge overhaul of the US healthcare system, and despite its controversies has drastically increased health insurance figures across the country. Although it is understandable that Trump would want to repeal it, as Republicans are largely opposed to universal healthcare, he has not yet suggested any alternative medical care plans, suggesting that he will be following the conservative route of private funding, rejecting ‘government handouts.’

The most controversial of Trump’s executive orders was the ‘Muslim ban’: a ban on travelling to the US from seven majority-Muslim countries for 90 days. There was an immediate international outcry, with many calling it unconstitutional and Islamophobic, and numerous protests throughout the country. However, federal judges eventually rejected the order, indicating a growing concern among the political elite. Another controversy is Trump’s executive order which reversed funding for foreign aid to groups that give abortions. It caused outrage among many feminist organisations, and as well as his proposal to defund Planned Parenthood. In response to Trump’s anti-women’s rights stance, a worldwide Women’s March was held on Inauguration Day, and it attracted more people than the inauguration itself, again suggesting a growing backlash against Trump. A proposed reversal of LGBTQ rights, including gay marriage, has also led to worldwide outrage.

Trump has also sparked tensions with his proposed building of the US-Mexico wall, not only for the wall itself but because he has stated that Mexico must fund it. Trump has not met with many world leaders, with the main ones being British PM Theresa May, and Canadian PM Justin Trudeau, indicating further angst. Tensions have further arisen in terms of a possible future conflict with China. Aside from his proposals, Trump has faced further scrutiny through his alleged allegiance with Russian leader Vladimir Putin, which has caused many to label Trump as untrustworthy and a traitor.

Recent betting odds place Trump at a low chance of impeachment compared to his first days of presidency. As both the Senate and the House of Representatives are Republican-led, it is highly unlikely that Trump will be impeached, despite numerous Democrat politicians have suggesting differently. Many high-profile politicians have publicly expressed their disapproval of Trump.

Rep. Maxine Waters of California, who tweeted that her “greatest desire was to lead @realDonaldTrump right into impeachment.”

Despite there being a low chance of Trump being impeached, he has withstanding lawsuits and his approval ratings recently dropped to an all-time low of 40%, according to Gallup, the lowest of any president in his first month of office. Therefore, there is still a chance that he will be impeached before 2020.