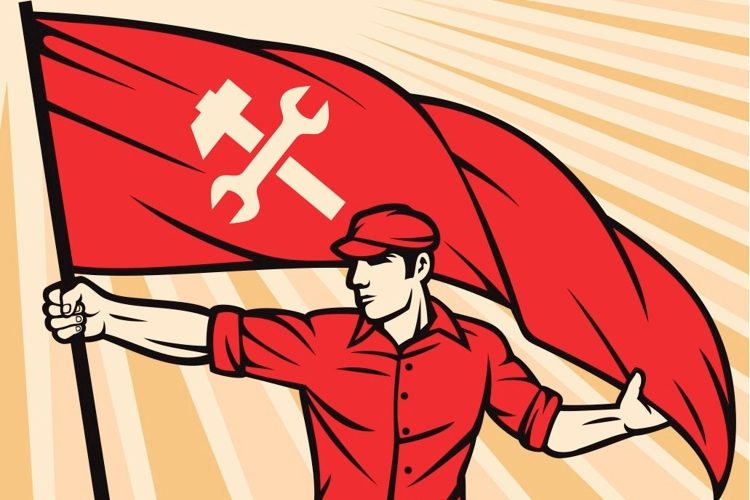 A man holding a communist flag | Foundation for Economic Education

Communism: Why it Could Actually Work

I sat on a chair at the island in the middle of my parents’ kitchen, scrolling through my phone while my brother was cooking, as our parents were out at a fancy dinner with their friends. I was not looking down at my phone to avoid a conversation with my brother, but quite the opposite. We were in the middle of a discussion we’d had a hundred times before, and I was looking for facts on the internet. The topic of our discussion was communism.

In most American households, this would have meant tearing the government and economic system to shreds, as it conflicts with almost every American value, but we are no normal American household. My brother and I were discussing how communism could in fact work, but it has historically failed because it has never been put into practice the way Karl Marx intended.

When Marx wrote The Communist Manifesto in the late 1840s, communism was intended to function within the realm of an industrial, urban society. Workers would work more closely together for a particular company; thus it would be easier to become part of the “working class.” Such societies would naturally create a socioeconomic climate to start a working class revolution.

However, the only major states to adopt communism were primarily agrarian societies, such as Russia, China, and Vietnam. Workers in these states were primarily agrarian workers and farmers who lived and worked far apart from one another, making any kind of organization for a working class revolution extremely difficult. Since communism has never been adopted by an urban, industrial state, it is difficult for one to argue communism is fundamentally flawed.

Furthermore, threats of limited space could mean that communism might be on the rise and the only viable option left for states to choose. In the past, employers could use outsourcing as a way to control the aggression of their employees. Primarily in the U.S., corporations have shut down plants and factories when workers went on strike for better wages and working conditions and outsourced them to countries such as Korea and Brazil where these issues were non-existent.

However, after a time, workers in Korea and Brazil also would go on strike, and companies again needed to move their plants and factories to states such as China and India. But, in recent years, workers in these states too have started to fight back for better wages and working conditions. Companies are running out of places to go, and eventually they will be unable to find places where they can outsource their plants and factories. Capitalism is an imperialist running out of places to expand, and when there is nowhere else to go, it will collapse.

Though communism has never been implemented the way Marx envisioned and capitalism is running out of places to expand, this stigmatized system still faces numerous challenges. Communism naturally creates a society lacking creativity and innovation, which are required aspects for any civilization to thrive. In a communist society, production is everything, and change is frowned upon. The state controls how things are done and monitors every aspect of civilian life. If a person living in a communist state has a new, better way of doing something – that is ultimately rejected by a state committee for varying reasons – the state may become stagnant, leading to its demise, without the government admitting it. A recent example can be seen in the Soviet Union in the 1980s; their economy was collapsing but the state refused to change.

Furthermore, it can be argued that communism goes against human nature. Depending on a personal view of humanity, it could be said we are more competitive than cooperative, and most of history would agree. However, Marx dealt with this problem in his manifesto, arguing human nature was not fixed and was subject to change. It seems, as of now, humanity is unwilling to change from a competitive to cooperative mindset, but only time will tell if such a change is in fact possible.

In the U.S., communism is a topic easily blown off as ridiculous and un-American, but it is not going away anytime soon – which means it is important to keep up the discussion of its pros and cons. Communism is often criticized for being too unchanging, so it is important states do not fall into the same trap. Not to argue states should be open to switching to a communist society, but when the chips are down, no option should be discounted simply based on stigmas and stereotypes.