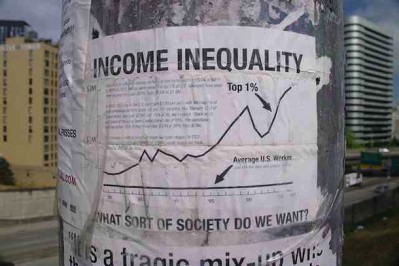 Is America a Third World Country?

U.S.A. The level of inequality in the United States is staggering and has only deepened over the past few decades. Recently, Rolling Stone published a very though-provoking article highlighting how modern America resembles a Third World country. In the article, Sean McElwee shows how the United States lags behind the developed world with regards to criminal justice, gun violence, healthcare, education, inequality and infrastructure. These six aspects are striking, the most important, in my view is inequality.

America is portrayed as one of the richest countries in the world and yet in can’t seem to provide basic essentials for its least well off citizens. McElwee points out that in almost every measure the U.S. tops the list of OECD countries on income inequality.

The primary reason for this, I would argue, is that there has been an almost fundamentalist aspect to the way many of those on the right have argued in favour of the free-market dictating the lives of people. The result of this fundamentalism has been a dogged commitment to the “you’re on your own” mentality which has meant that America has “the stingiest of welfare state of any developed country.”

When compared to countries with more robust welfare states the picture get even starker: food security in America is more on par with Indonesia and Tanzania than O.E.C.D. countries like Australia. In addition, many companies now offshore jobs to the U.S., a recent article in Salon reports: “In Sweden the minimum wage is $19 per hour and workers enjoy a minimum of 5 weeks paid vacation a year. In the US the minimum wage is a tick above $7 per hour and workers can expect no more than 12 days annual vacation…IKEA have set up a factory in Virginia…..Hyundai, KIA, BMW, Honda and Toyota have all set up to take advantage of the world’s latest cheap labour source.”

Inequality is harmful to society, it leaves people feeling excluded, unhappy and potentially angry which in turn leads them be disassociated from democracy. This disassociation of people on the bottom of the income distribution leaves the process open to those at the top to exert their influence any way they see fit, usually monetarily through campaign contributions to politicians. Regardless of the intentions behind it, trickle-down economics has failed the majority of people in the United States, creating a society that resembles something out of a Dickens novel, only more people have guns.

To conclude, there needs to be a massive paradigm shift in the United States; the idea of capitalism being more desirable than democracy needs to be abandoned. The notion that trickle-down economics increases social mobility has been shown to be a complete fallacy and there needs to be a de-coupling of this idea from American politics. There is still a significant number of fundamentalists out there who claim that only more capitalism, and less regulation, will solve inequality – I am yet to determine whether this is actual belief or wilful ignorance of the devastating effects of such policies.