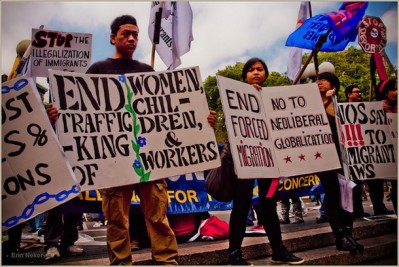 U.S.A. Although many people might be familiar with the term “neo-liberalism”, there is still very little reporting of this economic model, even though it pretty much dominates all political debates and policies. The understanding and awareness of this theory is crucial since it has become the prevailing policy of political parties on both the right and the left. It is also essential to understanding why there is a perception that the two major parties are similar in terms of economic policies.

Neo-liberalism is the defining economic model of our time and its model of freedom has permeated throughout our entire media. However, if one steps back and examines at what has resulted from the adoption of this model it becomes clear that what we have in today’s ‘free society’ is in fact a very peculiar and narrow idea of freedom, based on a narrow view of how human beings act with each other and governments, committed to providing freedom of choice in all areas have actually presided over a rise in inequality, an increase in the rate and severity of economic crises and a dramatic collapse in social mobility – the consequence has in fact meant the return of the power of class and privilege.

Neo-liberalism has developed in a defining force in American politics. The policy of broad de-regulation of finance, which at one time was seen as highly dangerous, is now the policy of both major political parties. What the financial crisis has shown, just as it did in 1929, is that capitalism cannot be left unregulated. In the aftermath of the 1929 Wall Street Crash, a Democratic president embarked on a policy of stringent regulation of the financial sector so as to protect ordinary citizens from the damaging effects of financial busts. The objective now appears to be to maintain the system as it is without implementing major regulation.

What crises highlight is that capitalism cannot abide a limit; unregulated capitalism, based on the events of the past 20 years, will inevitably result in collapse. The idea of “moral hazard” is also problematic; if financial institutions know that the Federal government will bail them out if things go wrong then the likelihood is that they will embark on riskier investments. Moreover the rise of neo-liberalism has made financial institutions incredibly powerful in the political sphere, influencing policy and political appointments of the Federal government

The rise of neo-liberalism has resulted in a change of agenda in the country. There has been a shift away from implementing policies which have a national objective such has Lyndon Johnson’s War on Poverty. Since deregulations the Federal government no longer has the power or the resources to fund such programmes because the confidence of the financial markets depends, in the neo-liberal sense doctrine, on limited government spending on public programmes coupled with the guarantee that government will intervene when things go bad. This is dangerous not just for the ideals of the Democratic Party, but also for the foundations of democratic politics itself: if the markets and financial institutions have power that far outweighs that of the American people to influence government policy, then the free-market has superseded democracy as the driving of political policy and discourse. The tenets of neo-liberalism are based on the premise that capitalism has no downside and whenever there’s a boom they claim that the bust is never coming. However the bust always comes with the government, and by extension the taxpayer, being on the hook to rescue the system from the brink of collapse with increasing amounts of revenue required to paper over the cracks when the inevitable crisis occurs.

Even in the wake of the 2008 financial crisis, the dangers of neo-liberal economics and Public Choice Theory have not been addressed, and they desperately need to be; politicians need to assert themselves against the moneyed interests that only want to diminish and debase the democratic process. I believe that America can be the great white hope for democracy, it certainly has the means to do it, but its government has to de-couple itself from those attempting to undermine its purpose. Neo-liberalism assumes that the interests of the rich are the same as everyone else’s and if the government simply stopped “getting in the way” of the private sector, their wealth will trickle down onto the rest of the population. Underlying the neo-liberal economic model is that, when left unregulated, the free-market will benefit everyone – it’s based on the simplified view of human beings simply as self-seeking individuals whose needs are best met through the marketplace, not democratic politics. This is an irresistible argument that politicians on the right and left have given away much of their power to those markets.

The consequence is that there was a return of inequalities and social injustices on a scale not seen for a century – the very thing, I would argue, politicians are supposed to prevent. Neo-liberalism has meant that politicians are now weakened, corrupted and without the power to change society for the better and millions of people have been left without proper representation and even less control over their lives.