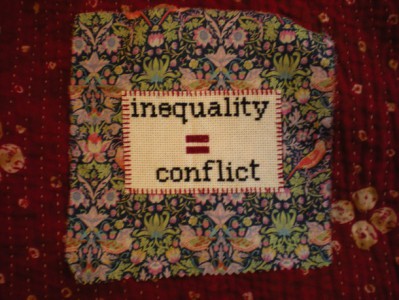 Continued Erosion in the Name of Commerce

U.S.A. The debate surrounding the economy and capitalism is narrow, simplified and doesn’t address the underlying problems of society caused by unfettered capitalism. The neo-liberal economic agenda has permeated so deep into politics that those on the mainstream right and left have ended up simply arguing over how many angels you can fit on the head of a pin. Part of the problem is that anybody who argues for tough regulations on business or a fairer re-distribution of wealth is viewed as not living in the real world. However when one looks at the real world and sees the level of income inequality and the sociological problems that such inequality has wrought, one can’t argues for anything other than that.

Income inequality in America has grown dramatically over the past 30-40 years and yet the debate about the causes of such inequality seems to become increasingly narrower. The corporate media seems reluctant to highlight policies that have led to out-of-control financial markets, a hoarding of wealth by the rich and a stagnation in wages for a great number of people. As a result the debate goes round and round in circles and never moves forward which leads to a pursuit of more of the same by lawmakers. Of course one cannot also not ignore the fact that many of these mainstream media outlets are run for profit in a capitalist market and thus have a vested interest in the status quo.

The rightward shift in the debate revolves around an economic policy that places greater value on profiteering than humanity. A consequence of this mind-set means that all arguments about the economy do not sufficiently address problems of inequality and alternative ideas are side-lined.

It should be obvious that if news media is wholly run and operated by corporations then the ultimate goal of such media is to serve the interests of that corporation. This is especially pertinent when it comes to economic issues because it is not really in the corporations best interests to put forward ideas that may eat into its profits. Consequently even though report after report shows the level of income inequality in America, this is spun in a way that seeks to blame economic mismanagement by governments rather than the undermining of democracy by those with money.

This is particularly true in America where even the financial crisis of 2008 was portrayed as a result of over regulation and other government failings rather than a result of behaviour by the financial industry that was exploiting an economic policy that has been dominant for 30 years in the country.

The right has been in control of the agenda on the economy for so long that even many of those on the left have internalized much of the narrative that government regulation of financial markets is bad for the economy. The narrowness of this debate is dangerous for America because if the economic policies that have caused so much devastation continue to be promoted then crises will continue to occur, the wealthy with continue to argue that these crises are the fault of the public sector and important democratic institutions will continue to be eroded in the name of commerce.