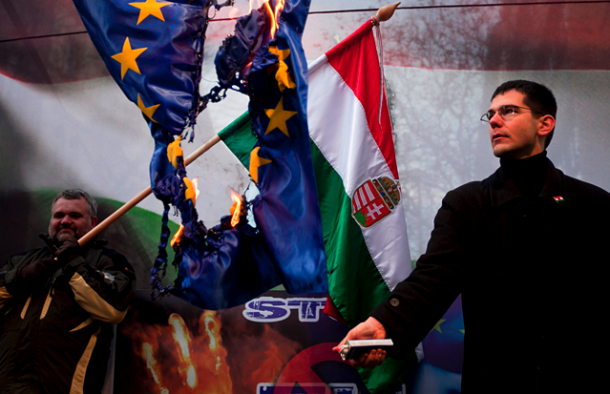 “[Hungary’s current] government [Fidesz] has made political appointments to key positions in public institutions such as the Media Authority, National Judicial Office, and the Constitutional Court. Media freedom has been significantly curbed. The constitution enshrines discrimination against people with disabilities, women, and LGBT people. Religious freedom has been undermined. Homelessness has been criminalized” (Human Rights Watch [HRW], 2015).

The erosion of democratic standards and values in Hungary took effect and took big steps when Hungary’s new Constitution emerged and effectively allowed Orbán’s Fidesz party to distance the legislative from the judicial, and present what resembles a soft police state.

Mega-amendments presented Fidesz with opportunities to step back from its previous concessions and see a political system influenced considerably by a single man despite the democratic premises of the political system that still exists in the country.

Such monumental changes in Hungary’s governments, parliament, and president, and to its constitutional court, municipalities, and political parties, have raised questions over the health of the political system.

Fidesz has created conditions that preclude Orbán from being replaced, either through losing the right to vote (i.e., committing a crime) or if the Hungarian parliament moved to elect a new PM through a constructive vote that sees the loss of confidence in the PM’s leadership. This would be accomplished with at least 20% of the MPs arguing in favour of the PM being removed – thus submitting a constructive motion of “no confidence.”

Parliamentary elections held last year did little to supplant sentiments in Hungary that Hungarians are living in a system that allows for a single party to govern. Instead, Hungarians were left with the sense that the outcome had already been decided for them with little options being presented in order to manage a different trajectory.

Adoption of the 4th Amendment of the Constitution, as Frank Markovic (2014) notes, “brought about a change in the electoral system. Traditionally, Hungary’s elections have been held under a mixed system whereby Hungarians cast two votes: one for the party list in multi-seat constituencies at regional level, and the other for the single-seat constituencies at district level. This system had been very similar to that of Germany, but not any more … As for the single seat constituencies, we can safely say that the two-round majoritarian system has been turned into a first-past-the-post (FPTP) one.”

Orbán is now serving in his second term because of a system that was created in order to allow for that second term and legitimized the work that his party undertook during his first. His victory can be explained by the campaign of the left-wing party in opposition to Fidesz. The record of the opposition party discredited it, and cast Fidesz in positive light.

Many Hungarians were also convinced that a fresh start could be realized with the entry of a new party and leader in power but the Left Alliance brought the a bad history with them and reminded Hungarians of a problematic past. In essence, it pitted voters between two poles.

Now Hungarians are constantly told of the potential dangers of an extreme right-winged party. So long as Jobbik’s extreme politics and actions continue to thrive to the right of Fidesz, Orbán continues to look as though he is the country’s not-so-right winged leader with good intentions for Hungary’s future.

Hungary’s move to autocracy has become a test for democracy – including its media freedoms, civil society, independence of the judiciary, religious freedoms, and forms of criminalization. These are intricately tied to the economic health of the country and the economic direction of the EU.

The political situation in Hungary and the violations taking place against Hungarian peoples brings the question of EU member state sovereignty and the so-called normative power of the EU into question. For the past several years, the EU has attempted to keep Hungary from moving away from the West and (further) toward autocracy.

But those who oppose EU federalism and supranational authority might argue that Hungary has the right to choose its own political leadership and political direction. This is not a matter of shared politics or sovereignty.

July 3, 2013 was a critical date in this interaction, when the European Parliament past a Resolution stating that the Hungarian government was in violation of European values outlined in Article 2 of the Treat of the European Union (TEU). Violations were recorded on more than one occasion.

This was a first (failed) step in re-aligning the values of Hungary with those of supranational polity Hungary agreed to join through a referendum on April 12, 2003 (nearly 84% of voters [45% voter turnout] approved the proposal). The country became an EU member state roughly one year later, on May 1, 2004.

Markovic also explains that, “[t]he EU does have, however, a tool at its disposal to push Hungary into complying with the EU standards, though it has so far refused to deploy this option. Article 7 TEU allows the EU to strip Hungary of its EU voting rights for being in breach with the values defined at Article 2 TEU. Given that the use of this so called ‘nuclear option’ is indeed controversial, it is increasingly unlikely that the EU will ever resort to using Article 7 against Hungary.”

Economic growth has found its place on the agenda of Fidesz but there is room for questioning whether Orbán’s autocracy is informed by economic difficulties premised on the idea that an autocratic government can better ensure economic growth, or if autocratic rule is best suited for resisting economic decline.

While autocrats can accomplish a great deal given less legislative, judicial, and media pressure, deluded autocrats have plenty of room for economic destruction, which would be linked to the other 27 member states of the EU.

It would be impossible for Orbán to remove Hungary from the EU completely, but the EU should be cognizant that Hungary’s autocratic swing is far more complex and serious than it has previously shown.