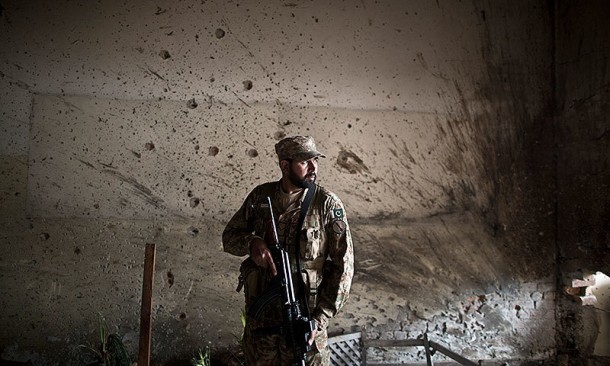 Raja Nasir Abbas, Secretary General of Majlis-e-Wahdat-e-Muslimeen, pointed to Pakistan’s “weak policies” as the main contributor of terrorism in Pakistan. Violence perpetrated against the Pakistani state and within its borders cannot be tamed using military assets alone. Despite the need to look beyond the military, there has been a tacit failure to focus on political, legal, financial, and law enforcement (deterrence and rehabilitation) aspects to fix structural faults in Pakistan.

Restraint in the use of security forces, state relations, and the unanimous declaration of peace talks are often used to explain terrorism in Pakistan. Although these factors should not be ignored, power coupled with structural weakness has done much to cultivate terrorist over previous decades. The power dynamics of Pakistani politics and cronyism pervasive in the political system points to weaknesses largely unexplored by Western and Pakistani terrorism/conflict experts.

Limited state resources are apportioned to the military and state-level officials and others willing to provide assistance to the state by other means. Pakistan’s government has not delivered even the most basic services within the country. Consequently, security forces remain underfunded, under-equipped, and are poorly trained, while a faulty judicial system has smoothed the planning and implementation of terrorist militant operations within Pakistani borders and in the regions adjacent.

Ongoing conflict in the disputed territory of Kashmir is one of the main drivers of terrorism in Pakistan. Conflict in that area is part-and-parcel to a much larger problem with its powerful neighbor to the east. The Pakistan-India relationship has put an incredibly amount of pressure on the Pakistani military and plagued Pakistan’s various administrations for decades.

India’s profound effect on Islamabad’s foreign policy has also left the country financially drained. Resulting from this policy is the continued degradation of Pakistan’s capacity for internal governance, even if it means the fostering of terrorist militants that might spill over into India. Pakistan is still caught between its own terrorist threats at home and India, which has locked Pakistan in a costly fear-induced arms race.

Trapped by its own historical developments, Pakistani funds allotted to the Inter-Services Intelligence (ISI) have been used to support Jihadi groups with the view of putting them into action against India. Much of this support finds its place in Kashmir. ISI-supported Jihadi groups have been actively involved in the disruption of Pakistani politics by opposing democratic movements becoming aligned with other forces opposing democratization.

2013 was the first time that the Pakistan Army doctrine identified tribal areas along the Pakistan-Afghanistan border as a “great threat.” From these areas, terrorists and insurgents have challenged Pakistan’s national security. The many tribes clearly exemplify the diversity of the Pakistani state.

The government has failed to promote tolerance in within its society. Without vital social forums, intolerance can continue to breed violence. Minor disputes in local areas can form an important base for further intrastate violence. Society is caught between terrorism and anti-terrorist offensives with additional obstacles that are government produced. The relationship helps frame the “Taliban mentality” in Pakistani society.

This is a reflection of the government’s investment in the country’s (social) future and the types of groups that can find support by the government. With religious institutions (i.e., madrasas and mosques) teaching that non-Muslims are infidels (“kafir”), educational institutions are increasingly teaching intolerance and prejudice. Thus, the Pakistani government, if it decides to be part of a critical dialogue, cannot choose which currents to be a part of and which ones it can ignore.

Questions presiding over Islam and the making of terrorism in Pakistan are not without warrant. A fair appraisal of Pakistani Islam, on the other hand, illustrates that violence has seeped its way into Pakistan vis-à-vis foreign schools of Islam promoted by other states (including Saudi Arabia) able to easily connect with and influence the Pashtun tribes in Pakistan. These are the regions where jihad has been culturally intertwined with local inhabitants and their disposition toward foreign invaders. Despite this further aspect of foreign “intervention,” religious beliefs are much less significant a factor than typically suggested.

Pakistan departed from its distant identity as the “land of the pure” and promises of minority protection (even religious pluralism) with democracy appearing re-appearing periodically but only superficially. Repression of civil society and political movements within the country diminishes the capacity of the Pakistani society to combat the many terrorist movements in the country. This is tied to the need for the establishment of a clear framework of policies and management structures regarding policies and security forces (often accused for abusing religious minorities), and their role in preventing terrorism.

Despite Pakistan’s troubling relationship with terrorism, including its distressing rise in terrorist activity over recent years, renewed activities by terrorists might compel analysts to re-examine the roots of violent and militant extremism in the country. Traditional, or previously accepted “causes” of terrorism in the Pakistani state might therefore come into question and receive renewed focus. The ostensible continuity of terrorism can provide an opportunity to identify roads for recovery and ways of tempering the virulent terrorist challenge in and around Pakistan.

Because the US and other Western countries have an ongoing interest in seeing the development of a stable and secure Pakistan, external assistance exists. Though the future is unclear, and undoubtedly complex and full of risk, there exists a clean policy canvas. With the end of US operations in Afghanistan in 2014, the US has also entered into a promising policy landscape in which some positive developments between the US and Pakistan relationship could be realized.

Scott Nicholas Romaniuk is a graduate student at the School of Security and Global Studies, American Military University. He specializes in military and strategic studies, and foreign policy analysis. His areas of research include conventional and asymmetric warfare, (counter)terrorism, (counter)insurgency, religious extremism, and processes of (de)radicalization.