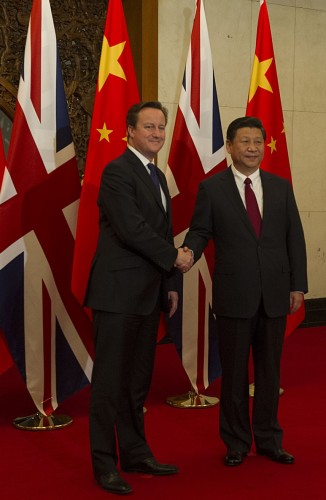 Britain, China and the European Union

Xi Jinping, President of the People’s Republic of China, will pay a four-day visit to the U.K. from October 19 to 23, bringing with him plans for long-term investments and hopes of stronger commercial, economic and political ties between the two countries.

A British delegation visiting China in late September publicized deepening political and economic relations between Britain and China. George Osborne, British Chancellor of the Exchequer, led British businesses, heads of cultural institutions and a large ministerial delegation to express British aspirations for a golden era in Anglo-Chinese relations. “Let’s stick together to make Britain China’s best partner in the West. Let’s stick together and create a golden decade for both of our countries” Osborne said, delivering a speech to the Shanghai Stock Exchange on September 22.

Among the many arguments for Britain’s exit from European Union (the so-called “Brexit”), British Eurosceptics advocate the possibility of stronger ties with fast-growing economies outside Europe, notably China. Their case is that, after leaving the European Union, Britain would retain full access to the EU’s single market, at the same time being able to foster commercial and economic relations with developing countries and extra-EU economies, and also to sign free trade agreements.

While stronger economic and political ties between Britain and China are likely to foster growth, trade and trust between the two countries, Eurosceptics should take in account that investing in the U.K. is highly attractive for many reasons, having a direct link to the EU’s single market being one of the prominent ones. Were Britain to leave the European Union, Foreign Direct Investments to the U.K. would probably decrease. Chinese authorities, on the other hand, speak of forging “long-lasting and effective cooperation mechanisms and creat(ing) a sound trade and investment environment between China and the EU”, valuing Britain not only per se, but also for the possibilities of access to the EU’s single market.

The growth arising from a Brexit may well be with a minus sign.

Chancellor of the Exchequer, George Osborne, “Let’s create a golden decade for the UK-China relationship”, September 22, 2015.

Ministry of Foreign Affairs of the People’s Republic of China, “Foreign Ministry Holds Briefing for Chinese and Foreign Media on President Xi Jinping’s State Visit to the UK”, October 13, 2015.