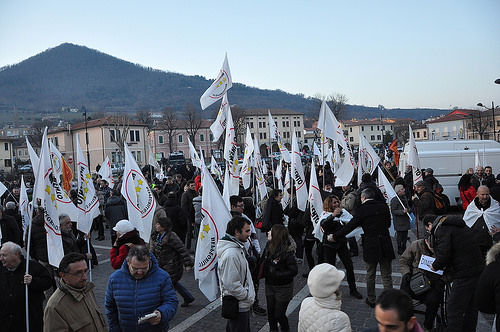 The Web and Political Participation

From at least three years the second Italian party is the Movimento 5 stelle, the political movement founded by famous comedian Beppe Grillo some years ago. Thanks to the 2013 elections Movimento 5 stelle became the first opposition party to the Italian government (first chaired by Enrico Letta and now by Matteo Renzi) and it represents an absolute novelty in the Italian political scene.

The movement brings a great revolution not only political but democratic and structural because of the movement of Beppe Grillo has an internal organisation very different from that of the traditional parties: their innovations aren’t just in the political programs.

The Movimento 5 stelle was born around Beppe Grillo’s blog and from there was grown and developed until becoming the second largest party after PD of Matteo Renzi. The movement, actually, carries on a true cultural revolution which provides an enlargement of participation in the political matters due to the powerful Web.

Internet became the main tool to actively participate in political life. No professional politicians, no party congresses, but citizens and a blog, which seems as an immense and continuous meeting. Even the choice of politicians and candidates is taken in this way: who wants to be an official candidate must achieves votes through online voting.

For example, before the general election of 2013 who wanted to run for a Parliament seat, had to post a video / presentation and asked for activist’s votes. Citizens who obtained more votes became an official candidate of the movement.  The 5 stelle elected members can stay in the Parliament only for two legislations: after that they will leave the place to new citizens. All the decisions must be taken by the activists.

The movement has adopted the same method when there was an institutional election: the election of the President of the Italian Republic. In this case, the movement has proposed a range of important names to its activists who were free to vote their favourites; the successful candidate was then taken as the official candidate of the Movimento 5 stelle.

The 5-stars politicians are proud of this democratic revolution: according to them the age of parties and of a fix ruling class is over; the future thanks to web will be participation of citizens through the network where they always are able to express their point of views.

The great challenge of Movimento 5 stelle is to completely change the political system, to re bring citizens into politics and democratic life, to reform the Italian ruling class; their values are honesty, frankness and consistency.