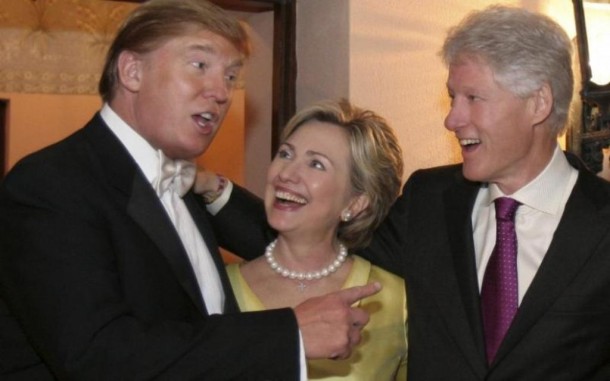 Why would Hillary not play it safe by choosing a running mate (Bernie, Elizabeth) who can deliver the country to the Democratic Party? You’ll find her betrayal all the more sickening when I explain later why she sold out.

Before it even got to the point where everyone in the Republican Party – except a few, including Ted Cruz – bows to king Trump, I predicted he will the nominee and Hillary Clinton will be the next president of the United States.

My predictions on Hillary have always been the most difficult task in this election cycle, not because FBI was looking into her use of a private email server – I declared her the nominee before FBI exonerated her – and not because almost everyone has a negative opinion of her. – I am still struggling with that mystery; Hillary is not any worse than most politicians – My difficulty to predict, when it comes to Hillary, has to do with her modus of thinking. She is a little bit, well a lot like Donald Trump. Neither Hillary nor Trump “give a rat ass” about the supporters, neither Hillary nor Trump are concerned a tad about the country; they are both self-serving and are overly consumed about how outcomes affect them, even if those outcomes were to be beneficial to their supporters.

This is now most obvious after Hillary clinched the nomination and Bernie Sanders has finally conceded there is no path forward. As the news of the three finalists for the Democratic VP slot are being floated around, it has become clear that Hillary is either sold out or is surrounded by morons who could not reason with her that neither of the three finalists would help fulfill The People’s agenda; she could have picked Bernie or Elizabeth (a no-brainer) if she really wanted to win in the general elections and make good on her promises during the primaries. It doesn’t seem to matter a bit to her, which is odd but I know why, and it is no accident; this is no mistake.

Hillary’s campaign fails to realize that history would only be made if she’s elected president in November. Perhaps, she is content to just be the first female nominee, or is it possible she’s paid handsomely to hand the elections to Trump?

I believe it’s the latter 1) Hillary has never been a good campaigner, a shortcoming she acknowledged a long time ago but that’s not an issue, read Madam President to see why she was never concerned about that  2) Hillary is a very calculated politician; as such, she would know that to deal with such unpredictable element as Trump she has zero room for mistake in the choice of VP; she needs a running mate who’s already popular, someone who needs no introduction, someone who is favored by an energized crowd; that’s Bernie Sanders and Elizabeth Warren 3) it’s already widely reported that a good chunk of Bernie’s supporters would either sit the elections out or vote for a third party, something she cannot possibly consider as positive for the outcome in the general elections 4) her opponent, Trump, is actively and aggressively courting Bernie’s supporters 5) although Bernie pledged his support for her, he cannot force his supporters to go her way; in fact, some bernizens have already expressed disappointment that the Vermont Senator has abandoned the movement; translation: they’re no longer loyal to him 6) although there are some upstanding Republicans who still refuse to bow to king Trump, most have already jumped into the Trump’s bandwagon, thus making the race just another election cycle with comparable outcome as past elections 7) Trump has a bigger voice and better marketing strategy 8) the Clinton’s campaign has made a number of strategic mistakes which could have cost her the primaries; it doesn’t seem anyone has learned anything from those mistakes 9) she knows she is not liked at all.

So, why would she not play it safe by choosing someone (Bernie, Elizabeth) who can deliver the country to her? There is just one plausible answer, Hillary sold out; surely it’s music to Republicans’ ears. It’s nevertheless another reason most will find her even more despicable.